Scripture as Catalyst for Revelation: A God Who Speaketh

So what is the most important purpose of scripture? The Book of Mormon is perhaps the clearest of all scripture in stating its own purpose, which I take to be identical with the purpose of all scripture. Nephi and Mormon both state a purpose to bring souls to Christ. But what role, precisely, does scripture play? Scripture is first and foremost a catalyst and preparation for personal revelation—not the ultimate source of the revealed word, as the protestant sola scriptura philosophy would have it, but an aid to obtaining it for oneself directly from God. This is not to say that the scriptures need not be studied carefully for what they actually say–exegesis is valuable. It is only to subordinate what the scriptures say to what God is trying to say.

Referring to the golden plates, Moroni says in Ether 4:6-13,

They shall not go forth unto the Gentiles until the day that they shall repent of their iniquity, and become clean before the Lord.

Come unto me, O ye Gentiles, and I will show unto you the greater things, the knowledge which is hid up because of unbelief.

Moroni clearly states that the Book of Mormon (the “most correct book,” as Joseph Smith famously said) is not as great as the primary revelations for which it prepares individuals. This passage suggests that exercising faith leads to sanctification and revelation, and that the scriptures are just an aid in the process—a catalyst. In context, it further teaches that the scriptures prepare us for the same revelations the Brother of Jared was given—including the privilege of seeing God face to face—the “great and last promise,” as it says in D&C 88:66-69, which is that “if your eye be single to [God’s] glory . . . the days will come that you shall see him; for he will unveil his face unto you[.]”

This is not an isolated passage. This doctrine is taught again and again.

The scriptures are part of “the greater portion” only if we understand that they are a part and not the whole. If we use the torch of the scriptures to light the heart-furnace of personal revelation, and continue in God, our light will grow brighter and brighter until the perfect day. D&C 50:24. But if we are complacent or think the torch itself all-sufficient, we will eventually receive the lesser portion: “for the letter killeth, but the spirit giveth life.” 2 Cor. 3:6. We will lose light by a sort of decay, whereby the poetry and mythos, the wonder and miracles, the Promethean flame of the living word, is sucked out of the pages by familiarity or reductive explication or misinterpretation or boredom or some other process, and the quickened corpus of canonical text is reduced to a skeleton of questionable doctrinal hypotheses and even more questionable historical narrative. The flame that animates the pages of scripture must be transferred by the Spirit to the heart of man, and the scripture thereafter become a servant to that other, better flame. The only alternative is that the flame will die and the scriptures become mere paper and ink, to be either mocked or set up as an idol, with either event bearing out the truth of Paul’s statement that “the letter killeth.” 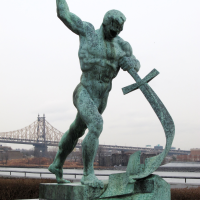