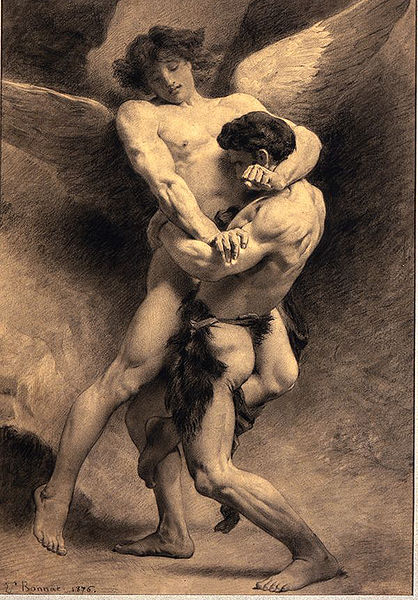 Scripture as Subversion: A God To Wrestle With

The crucifixion of Jesus Christ is perhaps the greatest of all subversive stories. It profoundly subverts the authority of the Jewish rulers and of the Roman yoke. It brings into question the justice of criminal law. It subverts reliance on the righteousness of Peter or the other apostles who abandoned their Lord to the mob. It even subverts reliance on any perceived right to feel close to God if one is doing his will, for Christ felt himself abandoned. It casts down the idols of man’s authority, justice, righteousness, and peace (among others), and sets in their place the image of the tortured God-man whose broken heart is still set on his Father’s will.

God is a creator. He laid the foundations of the earth. His work is constructive, not deconstructive. But he is so relentless in purpose and so faithful in his vision of what he wills that he will fiercely cast down all idols, even by torture (e.g., that of his Son). He is the God who took away the gift of language from the builders in Babel, who prophesied that because his people rejected the true foundation, the foundations of the temple and the walls of his city would be torn down until not one stone was left sitting on another.

Lamentations 2:4 He hath bent his bow like an enemy: he stood with his right hand as an adversary, and slew all that were pleasant to the eye in the tabernacle of the daughter of Zion: he poured out his fury like fire.

God is not an antifoundationalist, but is the inveterate enemy of all false foundations that obstruct his building plans. There is therefore a strong streak of iconoclasm (“idol-breaking”) through the scriptures.

Every age has its idols. One of the purposes of scripture is to break them down. One of the chief idols that devours men’s souls in every age is gold, and to every age the scriptures teach that “ye cannot serve God and mammon.” To an age that glorified the warrior above all heroes, the scriptures taught that a king of conquest was not permitted to build the Lord’s house. To an age that idolized rationalism, the scriptures breathed a “peace that passeth understanding,” and taught that “knowledge puffeth up, but charity edifyeth.” To a culture obsessed with the oral traditions that had accreted onto the law of Moses, the scriptures taught a higher law, summarized as radical love and forgiveness.

Our age has its idols too, as do each one of us who persist in sinning. (To sin is by definition to place something above God and his laws.)

Among the idols of our age are equality, tolerance, autonomy, and free expression. These ideals, properly understood and deployed, can accomplish good. But to the degree that any of them become an excuse for sinning or even for failing to reject sin, they are by definition idolatrous. And to our shame they are used in this manner constantly.

Insofar as each person and each age have their idols, the scriptures set themselves against us as an enemy. Like Jacob wrestling with the angel, it is not without a long and painful struggle that we obtain the Lord’s blessing, and some part of us will be pulled out of joint. But the result will be that we become worthy inheritors of Israel’s name (“to struggle and prevail with God”).

The struggle is not one of servile submission—a wrestle would be a supremely inapt metaphor for such a struggle. There is give and take, as in a lengthy wrestling match. God has not given us reason and judgment just so that we can sacrifice them on the pagan alter of fundamentalism. This too is an idolatry that will lead a man to damnation if he will not repent of it. The wrestle with God afforded us in the scriptures is in large measure an effort of clear thinking and careful, whole-souled discernment. The wrestle enables us to interpret our lives, our age, and the sacred texts in a correct manner; and while we would do well to hold the text in higher regard than our own instincts or received wisdom, nothing is properly sacrosanct except Elohim (“the Gods”).

One thought on “Nature of Scripture: Part 3: Scripture as Subversion”