The Human Condition In One Sad Story

If the Atonement was the completion of a task necessary for man’s reconciliation with God and with his fellow man, then we need to first understand the nature of the breach that the Atonement was meant to heal. If the “good news” of the Gospel is salvation through Christ, we need to comprehend what he saves us from before we can speculate about what metaphor best expresses how he accomplished it.

My cousin saw a young man from his high school walking on the side of the road, and he felt he should pull over. My cousin was a successful scholar, athlete, and member of the student government, well-liked and looked up to by many of his peers. This young man was at the opposite end of the popularity spectrum. He was occasionally bullied and constantly given reason to understand, through subtle exclusions and other signs familiar to most of the high school population, that he was not “cool” or “successful.” My cousin, for his part, had tried to be nice to this young man, as to everyone else, by such simple kindnesses as saying hi with a smile before class started. My cousin thought he seemed dejected and wanted to offer a ride, but then thought, “I hardly know this guy. It would be weird for me to offer him a ride. Besides, I will already be up late doing my homework.” So he ignored the generous impulse and kept on driving. He got to school the next day and found out that the young man had died the evening before by suicide.

This tragedy is played by three actors: my cousin, the young man, and the bully/excluder, all three of whom are, in their own ways, both victims and perpetrators of evil. My cousin was a victim of evil in that, among other things, he belonged to a society that values and rewards the completion of homework more than kindness to the downtrodden; a society with enough violence and exploitation that offering a near-stranger a ride is considered odd and suspicious; and he was made to suffer feelings of guilt for his small, passive role in the death of the young man. But my cousin was a perpetrator of evil in that he recognized a great suffering and a great need and yet failed to take actions within his power to ameliorate the young man’s deprivations and degradations: while he smiled at the young man, he did not intercede for him with the bully/excluder; while he was friendly towards him, he did not become a genuine friend; and therefore, when he had the generous impulse to offer a ride that might have altered the course of that evening, he ignored the impulse in order to remain within his comfort zone, avoid a possible social misstep, and keep up the steam of his own success.

The young man was a victim of evil for obvious reasons. The meanness and pettiness of his peers reinforced his internal narrative of inadequacy and unworthiness–a narrative familiar to all of us–until it took over his mind. His story could be supplemented with a dozen sub-plots to fill out the tragedy with his ineffectual strugglings against despair: with abortive attempts at recreating his image with a new hairdo, new clothing, new mannerisms, with each attempt feeling forced, fake, phoney, and thereby affirming his fears about himself; with friendships that failed to grow roots because of the parties’ immaturity; and always with the narrative of self-worth playing a doomed hero’s part, unable to marshall sufficient support to mount a successful campaign against the tyrant, and ultimately defeated and destroyed in the brutal battlefields of high school hallways. But the young man was also a perpetrator of evil when he took his own life. Suicide is a vote against hope, and the vote is heard by many, to the detriment of all, even if, as may be, his degree of fault for succumbing to despair was exceedingly small. The young man no doubt had parents and other family at home who loved him with the flawed, messy family love we all understand. The young man knew at some level that he was loved by his family, but the fact no longer mattered, no longer carried sufficient weight to sustain endurance—and in this he failed to live up to the highest potential of human nature. At his funeral there were many hearts broken, confused, troubled, and guilty, and with good reason, as he either did or could have foreseen. Foremost among them was his parents, perhaps divorced or perhaps now on their way to divorce, who perfectly comprehended the flawed character of their own love and went home after burying their son to sob out their “if onlys” to their lonely pillows.

The bully/excluder (a class of people we will call the “bully”) is the most blameworthy character in the tragedy, but he was also a victim of evil. The suicide of his victim was not his aim–and indeed, the suicide was the perfect revenge against him. Though I am loath to think it, it is not implausible that revenge against the bully was part of what was in the young man’s heart when he took his life. The genuine aim of the bully was merely self-promotion. Like a hen policing her place in the pecking order, the bully derived satisfaction by inflicting pain, but not because of the pain itself. Instead, his ability to inflict pain with impunity acted as a marker of his status–evidencing (to his mind at least) his superior wit, physical dominance, and/or relative popularity. Presumably, the bully believes that this is how status is established because this is what his experience of this wicked world has taught him. Nor can we fault the bully for his hunger for social status, which seems to be a universal trait among people generally and young people in particular, especially those whose emotional needs go unmet. Probably this bully belonged to this emotionally deprived category. And so he is not entirely to blame for the fact that his hunger for status became rapacious. He is himself a victim of circumstances, perhaps no less than the young man. And now the bully is deprived of his victim, whom he must follow to the grave sooner or later, meanwhile living with the knowledge (although he will no doubt find means to avoid facing it) that his bullying has marked him with a status he never desired–that of a murderer.

What would it take to redeem this tragedy?

Observations On The Human Condition

Each of us at various times acts the part of my cousin, the young man, and the bully. Blessed with wellbeing and success, when we are insufficiently kind and generous to those less lucky than us, we act the part of my cousin. When we are made to feel small and unlovable and respond by becoming selfish, we play the part of the young man. When we follow the dog-eat-dog way of the world for our failure to perceive the higher road, we play the part of the bully. Sometimes we play all three parts at once. And we are therefore all stained with the blood of the young man. What would it take to reconcile such tripartite victim-perpetrators with each other and with God?

In these three ways–and indeed in numberless other ways–we are caught up in a tangled web of lowness, meanness, smallness of soul. It tugs us down and causes us to tug others down as well. This is not, of course, the complete picture. There are forces internal and external that resist the downward tugging and strive upwards–sometimes with some degree of success. But even where individuals and communities have made progress, and even for the best of them, the following facts remain true:

In short, the opinion expressed in the Bible about man’s moral condition finds ample justification in our everyday experience:

The Lord looked down from heaven upon the children of men, to see if there were any that did understand, and seek God. They are all gone aside, they are all together become filthy: there is none that doeth good, no, not one. Psalm 14:2-3.

If God looked down from heaven upon the children of men and saw that none understood and sought him, that all were become filthy and that none did good, then how does any one of the children of men feel when they tire of their self-seeking sprint and look up to heaven? Surely, without supernatural aid, the natural reaction of any honest person gazing from earth toward the heaven of perfect goodness, truth, and beauty is at best one of distant admiration of an eternally unattainable ideal. But how would they feel if they were not only to look up but to be raised up to stand in God’s presence–a presence that causes the angels who can bear it to glow like lightning? If people react with fear even to the angels sent down to earth (which seems to be their consistent response when angels appear in their undisguised form in the Bible), how much greater the fear that would be evoked by the plucking up of the small, self-filled soul and raising it into the midst of a vast glory that consumes all dross and in whose light all self-deception and all secrets stand instantly revealed? God says, “No man shall see me, and live” (Exodus 33:20). Would not distant admiration be replaced with existential terror?  Would we not feel like a centipede whose rocky roof has just been unimaginably overturned and who now scrambles for a quick return to the comfort and safety of darkness? Would not the whole soul shrink away and strive, if only it could, to fling itself back to its proper orbital distance, as far from God as earth is from the sun? And finding that it cannot fling itself away and that somehow it continues to exist, would not the heated blood of the young man rise up in the mind like lava?

Because we could not come to him or even be brought to him without horror, he came to us, in the form of Jesus Christ. In the next post, I will do my best to elaborate on how the culmination of the work of Jesus–the Atonement–can in fact redeem the tragedy.

One thought on “A Modified Theory of the Atonement: The Human Condition” 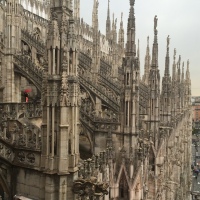